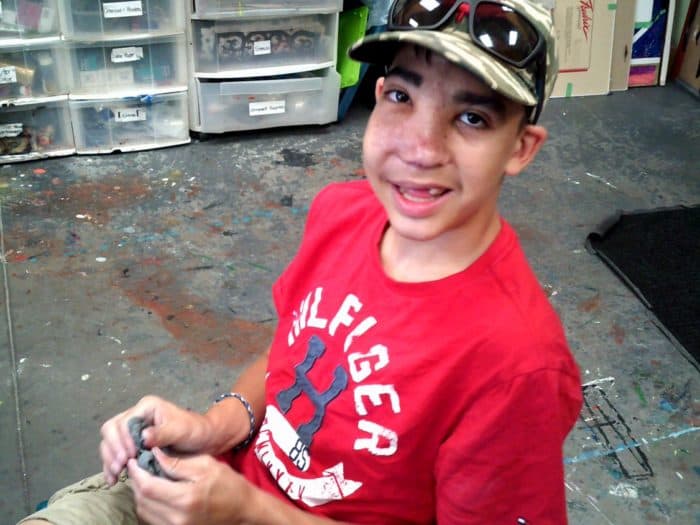 Michael was born with a deformity in his right cheek, nose and gums. When he was 7 years old, he began bleeding profusely from his nose and mouth and was rushed to the Hospital for Sick Children in Toronto where he was diagnosed with a High Flow Arteriovenous Malformation. As a mother, it was excruciatingly painful to watch Michael go through his illness. If that wasn’t hard enough, I was forced to leave work to care for him. Thank goodness for the support we received from the Antigonish, Canso, and the Toronto Lions. They were there for us every step of the way to help in anyway possible.

We never thought it would be possible for Michael to attend summer camp, but for the past 2 years Michael has attended Camp Trailblazers at Brigadoon Village. AboutFace worked with us to ensure that Michael would be as safe as possible and be able to attend camp with other children who have similar facial differences. Not only did AboutFace ensure Michael’s safety, but also ensured that camp was not a financial burden, and understood that our family had to stay close by in case of an emergency. AboutFace is an amazing group that supports so many families dealing with ill children.

Camp has made Michael aware that he is not the only child that looks this way and has also helped his self-esteem. As a child, Michael always tried to hide from his peers. Today he has so much confidence, knowing that he is not the only one with a facial difference. He has now joined Army Cadets and is no longer afraid to be seen. Thank-you so much AboutFace and Camp Trailblazers for making such a difference in my son’s life. He finally has his beautiful smile!